Our new album is an eclectic mix of genres and influences that testify to the true cosmopolitanism of the band. Copenhagen – New York – São Paulo. It all comes out in the music. 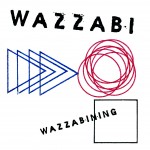 The album opens with 01. A Bigger Form, a mostly instrumental track with an understated verse that explodes into to a high flying chorus backed by Julie Maria’s vocals. 02. Lost Tapes (feat. Shaka Loveless), a percussive and driving tune with a N.E.R.D. like sound. DJ Noize adds flavors with his signature cuts. Next up is 03. Came Here To Die (feat. Camille Jones), strong lyrics, passionate performance and a definite film noir ambience. 04. Pulsar (feat. Carlos Zimbher), a brazil meets dub meets jazz scenario. Even if you don’t understand Portuguese we’ll bet Carlos’ voice will move you.

05. Army of Three is an ambient, epic and cinematic piece with the unconventional instrumentation of (in random order) melodica, clay pot, Somali voices, acoustic guitars, electronic beats & sounds and what not.  06. Come Along (feat. Shaka Loveless) is a fun, driving, highly danceable tunes that oozes funk, ol’skool rnb with a dash of hiphop and brazil. DJ Tue Track displays his mastery of the decks. Shaka is also featured on the next song 07. On The Cross and DJ Noize adds both ambient flavors and percussive cutting to this slow, driving, rnb track with a little jazz and electronica in the mix.

Change of scene. On the next 2 songs we welcome back our Brazilian friend Carlos Zimbher. 08 Fiador, an upbeat song about moving on after having been let down by a trusted person. It keeps building to the very end, with beautiful trombone playing by Jacob Munck. 09 Domingo is about love under pressure and starts out in an intimate loungy vibe, only to bursts into a rocking outro. Features great organ playing by Bennett Paster. The transition section is a tribute to sax hero Wayne Shorter. The album’s last cut is 10. Have Mine with spoken words by Jeff D Jensen, a song that displays a more jazzy side of Wazzabi over a fat bass line. The beat is a slo-mo fantasy over the Venezuelan Joropo. The words are sparse and carefully chosen, Jeff’s voice is mesmerizing.